The Conservation Team is fortunate to act as Church Architect to a large number of Parish Churches of varying scale, many Listed Grade I or II *. Our work includes Quinquennial Inspections, conservation repair work, feasibility studies, re-ordering and new facilities. We also have significant expertise in repair grants, ecclesiastical exemption and faculty jurisdiction.

Our Conservation Team is represented on the Approved Architects for the Diocesan Advisory Committees of Oxford, Peterborough, Gloucester, Coventry, Leicester, Birmingham, London, St Albans, Portsmouth and Worcester as well as being members of the Cathedral Architects Association and EASA. It is a condition of English Heritage grant-funded projects that only RIBA/AABC accredited architects work on these projects. Acanthus Clews has four such accredited architects.  Our Director Camilla Finlay is Surveyor of the Fabric at Worcester Cathedral and Cathedral Architect at Exeter, as well as siting on the Cathedrals Fabric Commission for England, the national body overseeing the church’s work on English cathedrals.

We have been fortunate to receive a number of awards for our Ecclesiastical work including the SPAB John Betjeman Memorial Award for the repairs to St Mary's Church, Bloxham and the RIBA South Conservation Award for the reordering and extension of St. Thomas of Cantebury Church, Goring On Thames. More recently we have received an RIBA National Award and RIBA South Conservation Award for our work at Warwick Hall for St.John the Baptist Church, Burford. 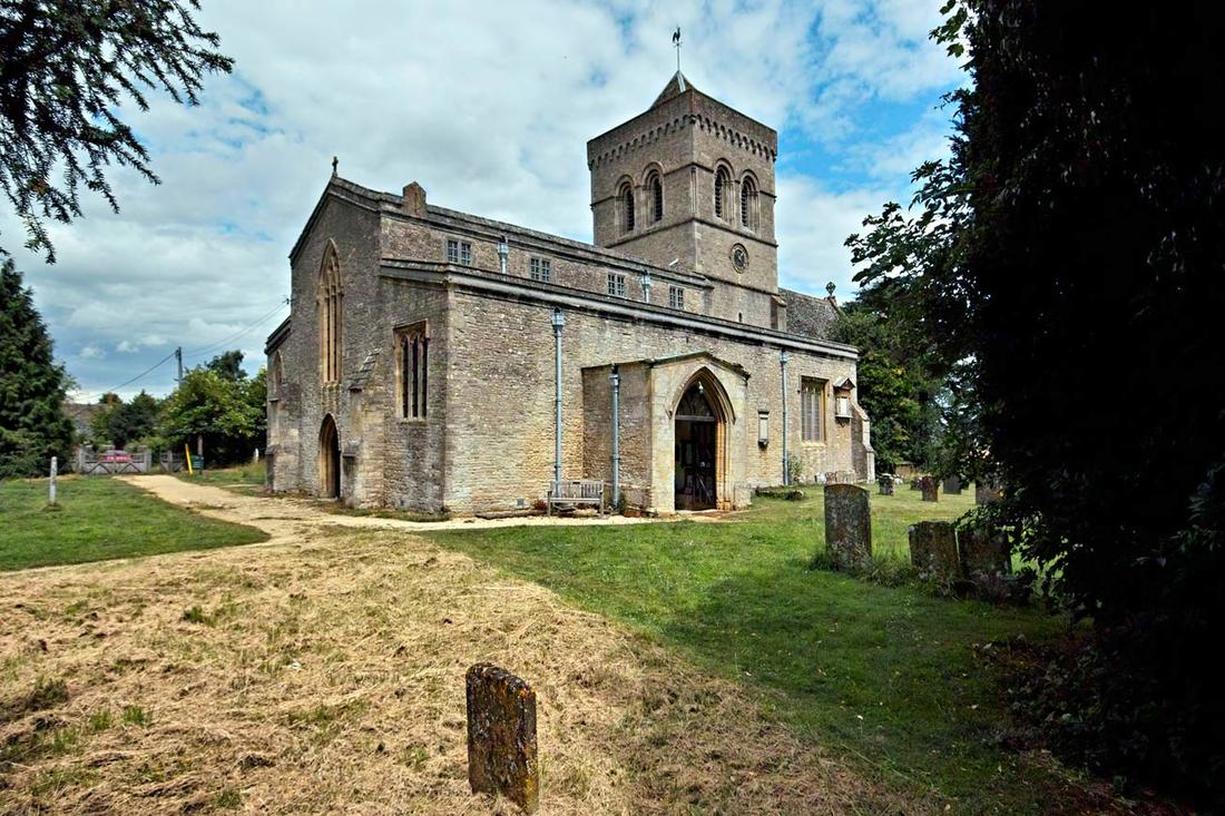 The Church of St Mary the Virgin, Kirtlington contains evidence of C12 origins and development through three subsequent centuries. The C12 central tower was rebuilt in 1853 by Benjamin Ferry in the Norman style and Sir George Gilbert Scott restored the Chancel. Acanthus Clews sought to meet the needs of the Parish through improved accessibility, comfort, and new facilities within the church, whilst creating a sympathetic re-ordering.
The works include a new stone floor with underfloor heating and glass floor to the original decorative iron grills. A new accessible WC and flower arranging area to the North West corner of the North Aisle has pale turquoise screens of ceramic backed glass of a paler shade to the existing organ pipes. There are also turquoise upholsered chairs in ash with a decorative flower motif from the Chancel screen.

St Nicholas dates to the late 12th Century although there may be earlier origins, with 13th, 15th Century work. The church was restored in 1870 by Charles Buckeridge with the chancel being rebuilt. In the 13th Century the present nave and aisles were added and the porch dates from the 15th Century. Acanthus Clews Architects were commissioned to take up the floor of the Church and relay it with new stone and under-floor heating.
The project included re-ordering to reopen the North door, creation of a disabled persons’ WC, kitchen, vestry and meeting facilities. Due to disabled access clearances, it is was not possible to include the new kitchen in the base of the tower. The kitchen facilities are instead contained within the western most bay of the South Aisle, and were designed as a piece of furniture and constructed in English Oak. Lids open to reveal a sink and hidden worktops. 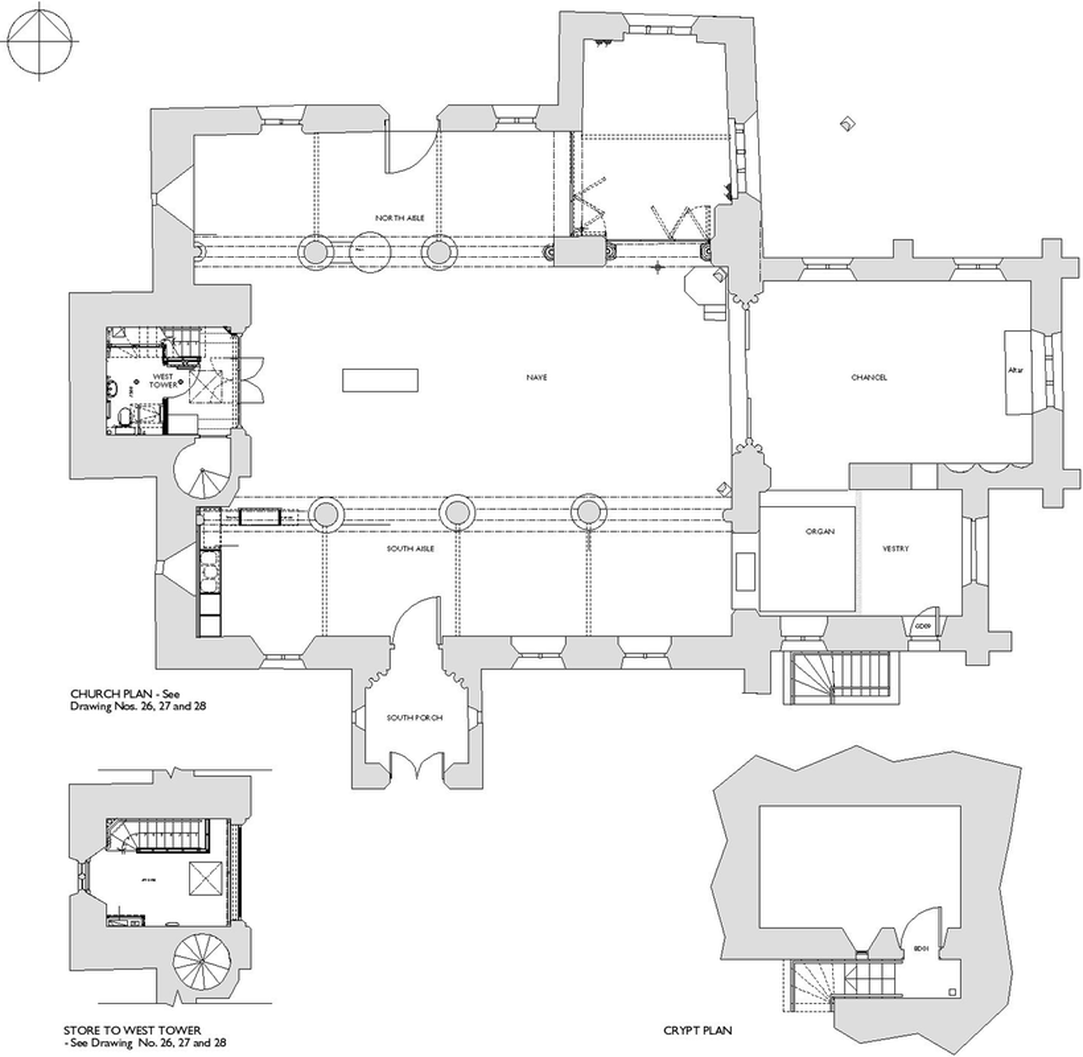 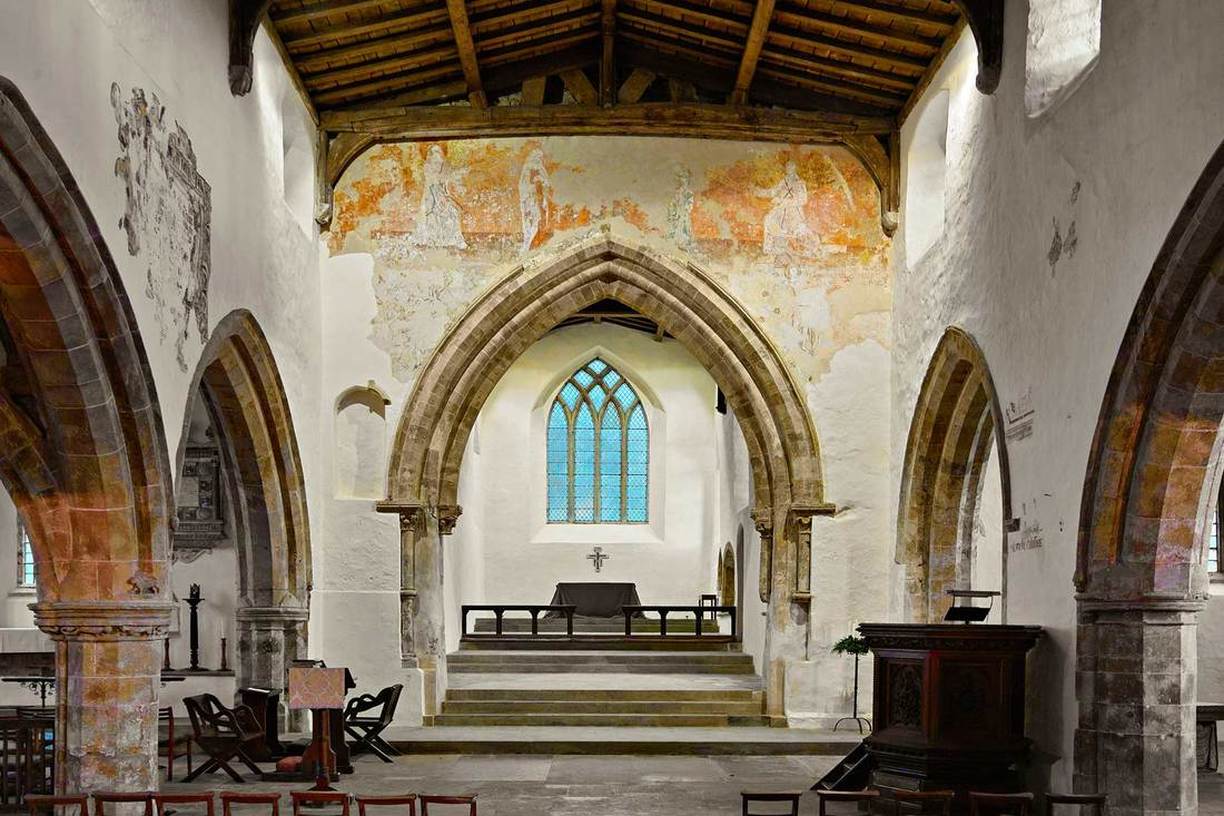 The picturesque Grade I Listed Church rises steeply internally in seven stages from West to East. The walls are limewashed and feature wall paintings of the highest quality in at least seven decorative schemes dating from the early C13th.

A survey conducted on the wall paintings showed extensive structural repairs undertaken throughout the Church which has resulted in little of the medieval render and few of the wall paintings surviving. However, extensive post reformation texts have survived. The one large exposed section of text confirmed that there were at least three periods of extant painting, some of which are extremely ornate. Uncovering tests showed that the surviving covered paintings were fragmenting due to aggressive preparation and scraping from previous decoration schemes. 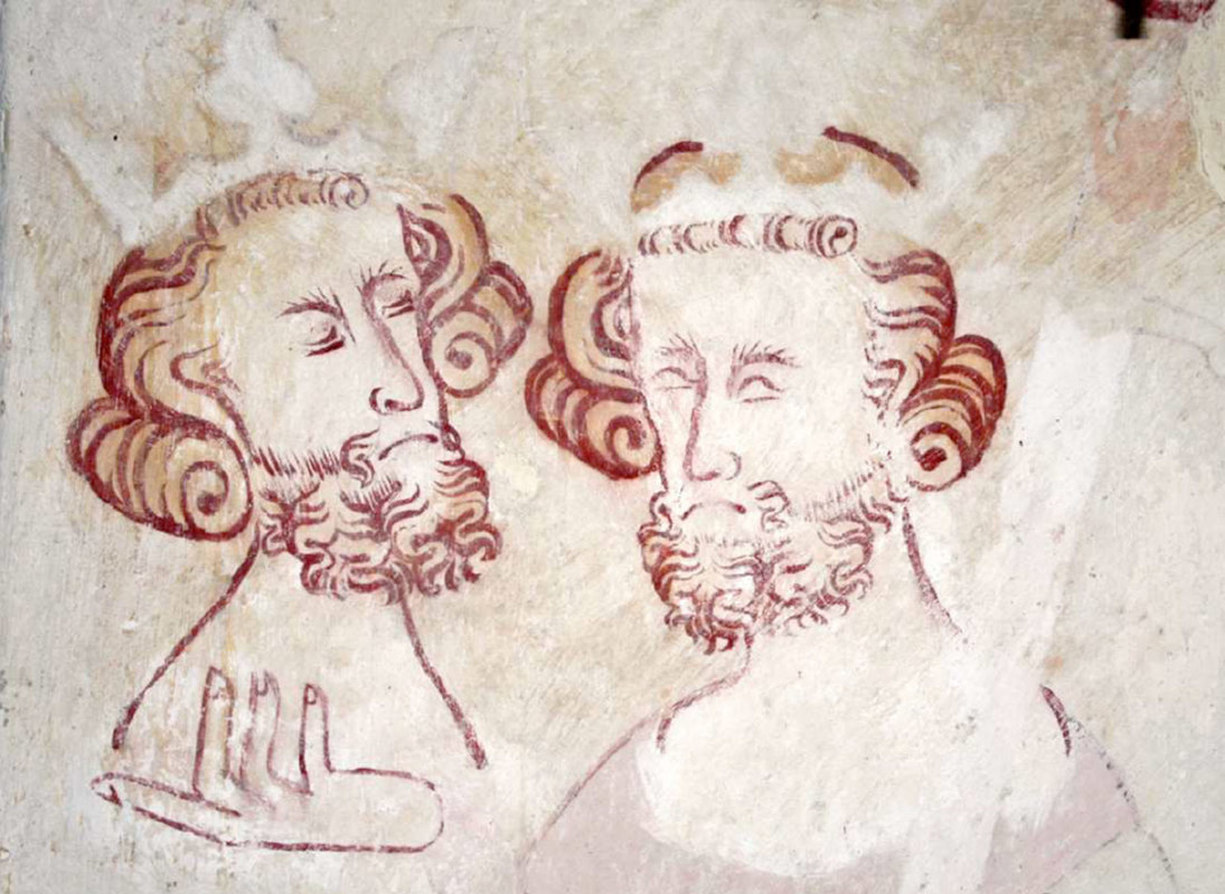 Large parts of the medieval paintings were found to be in a weak but stable condition with some significant sections unstable and vulnerable to further loss. The exposed section of post reformation text was extremely unstable. The nature and distribution of the damage to the wall painting showed the principal underlying cause of deterioration has been the failure of the building structure and the rainwater system. A programme of repairs has been conducted which has included the recovering of some of the lead roofs enabling consolidation of the wall paintings to be considered.

The wall paintings have been the subject of various surveys and reports which date back to 1966; the latest being by Tobit Curteis Associates in 2003. Following the survey of the wall paintings, a proposal for the consolidation of the wall paintings and re-limewashing of the Church was formulated, including repair and re-grouting the plaster substrate using a lime based grout as necessary to re-adhere the plaster layer. Where absolutely necessary, the paint layer was consolidated with a weak solution of acrylic resin to prevent further loss.
The small fragments in the South Transept were covered in limewash to protect them. The walls were cleaned of surface dirt and then re-limewashed. As part of the work, the windows were cleaned, and the rainwater disposal system from the Nave and North Aisle Roof was improved. Having approved the specification, English Heritage and the Council for the Care of Churches both grant aided the work, which commenced in June 2009 and was completed in November 2009.

The cleaning and re-limewashing of the Church now allows the wall paintings to be appreciated more fully. A full report on the conservation work conducted improves understanding of the paintings.

CONSERVATION OF THE BELL TOWER

This historically important and beautiful late medieval Bell Tower holds one of the finest English-hung rings of bells in the world, and is the iconic building of the town. All elements and elevations of the external fabric now require repair and significant conservation. Stone decay has now reached the stage that intervention is required to conserve the heritage value of the Bell Tower and protect people from falling masonry. The project will record the Bell Tower’s condition, identify appropriate repairs, then undertake those repairs. Research and analysis will inform better future conservation and management of the building. The Bell Tower project will provide the Evesham community, and the public in general,with explanatory information about the building’s heritage value and need for conservation. 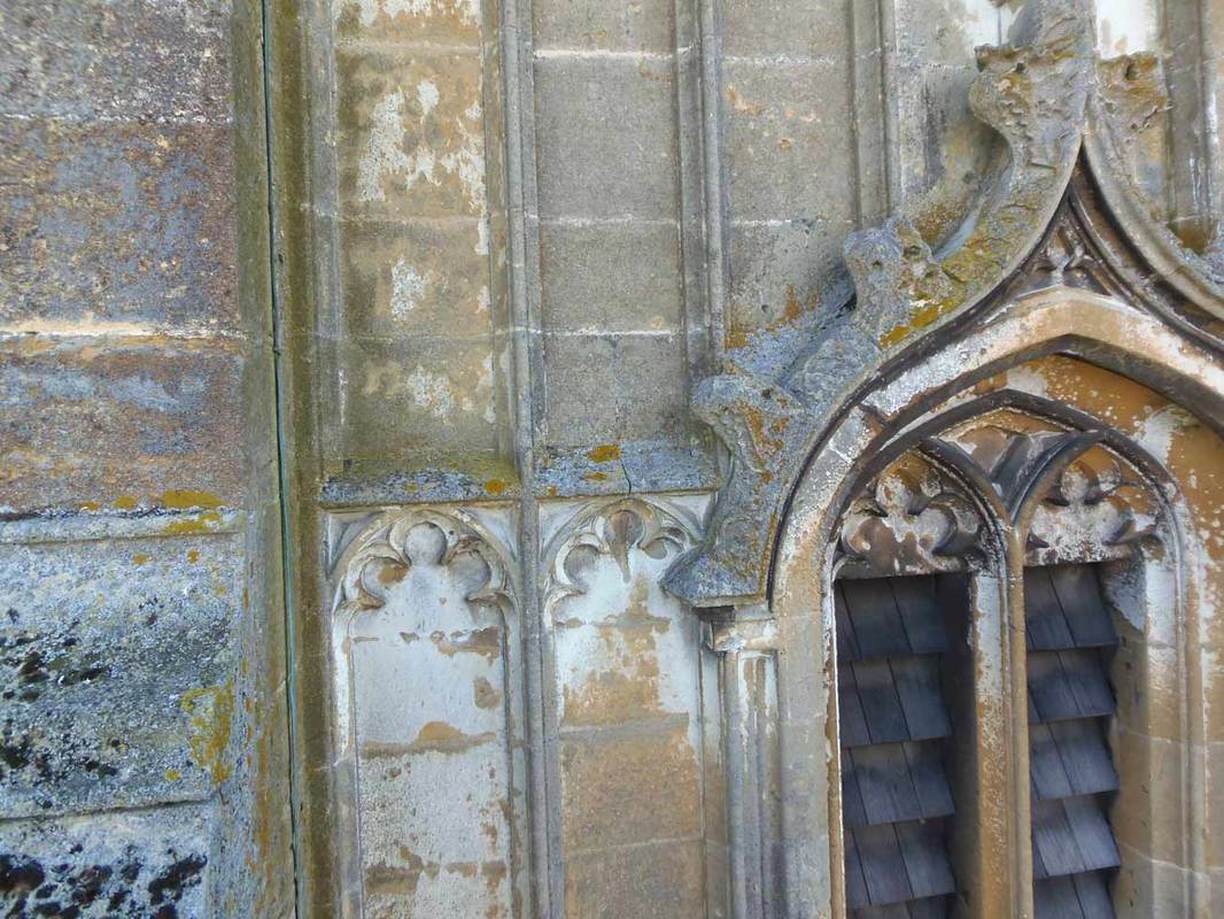 The Church of St. George the Martyr dates from 1933 and was designed in the Italianate style by FC Eden. Acanthus Clews have been working with the Church since 2010 to create an environmentally sustainable and flexible church building to meet the demand of a growing community. The work was planned in phases to reflect fundraising constraints. The first phase was the strengthening of the roof structure to support an extensive PV array. The barrel vaulted ceiling was renewed and insulated. The second phase was forming a glazed entrance lobby within the existing cloister, incorporating automatic doors to facilitate access for all. The third phase, completed in 2014, was renewal of the church floor to incorporate insulation and underfloor heating. A fully glazed screen with sliding folding doors is being installed over the summer of 2015 to create a flexible space within the North Transept for meetings and community activities. Currently the Church are fundraising for the final phase of the works which is the installation of a ground source heat pump to serve the underfloor heating. 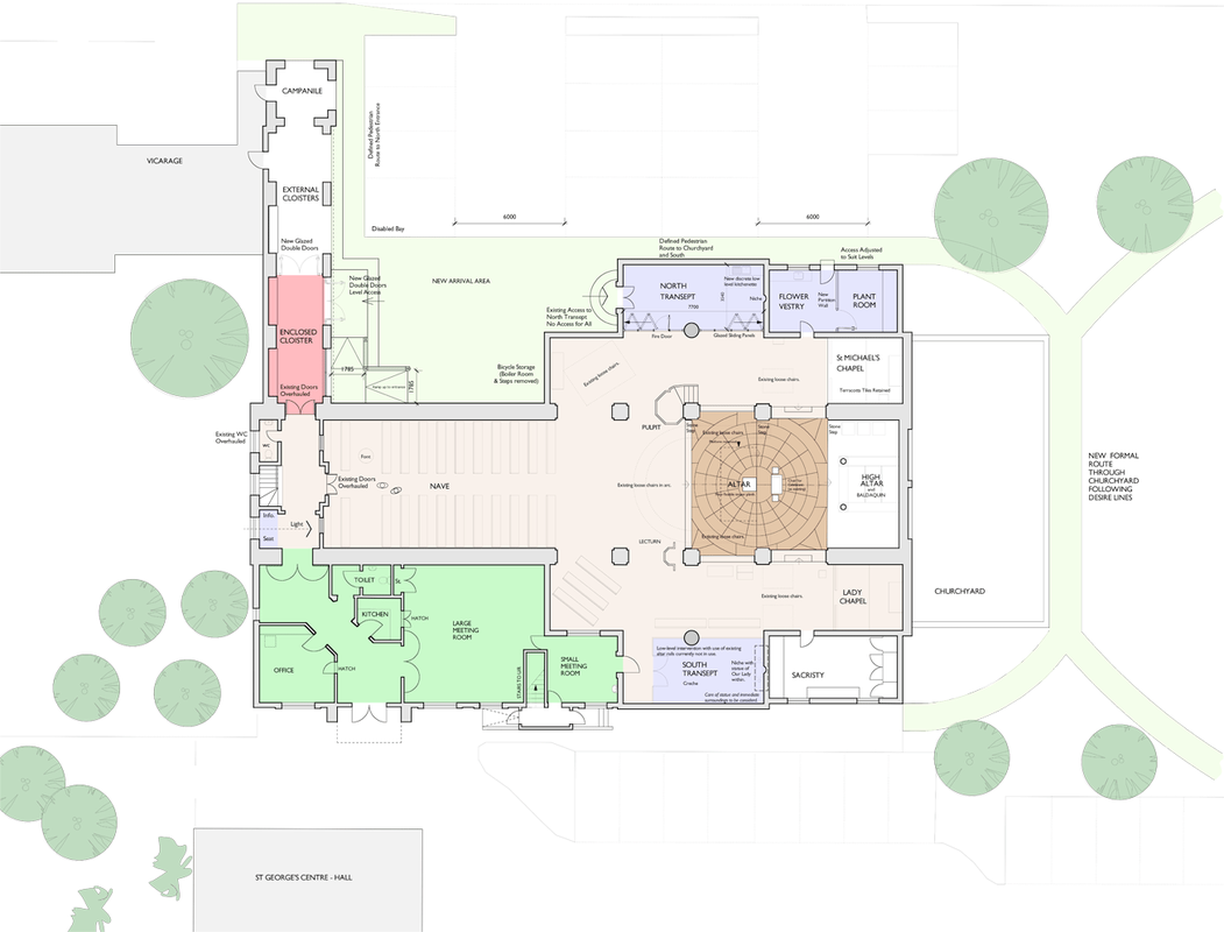 NEW EXTENSION AND DEVELOPMENT OF FACILITIES

St Dionysius’ Church has an exciting opportunity to improve the existing building in order to cater for more varied and exible worship and to encourage greater community use. The current building layout and facilities restrict the range of activities that can be held within the church. With improved facilities the church has the po- tential to properly ful ll its outreach programme both within the existing congregation and the wider community. 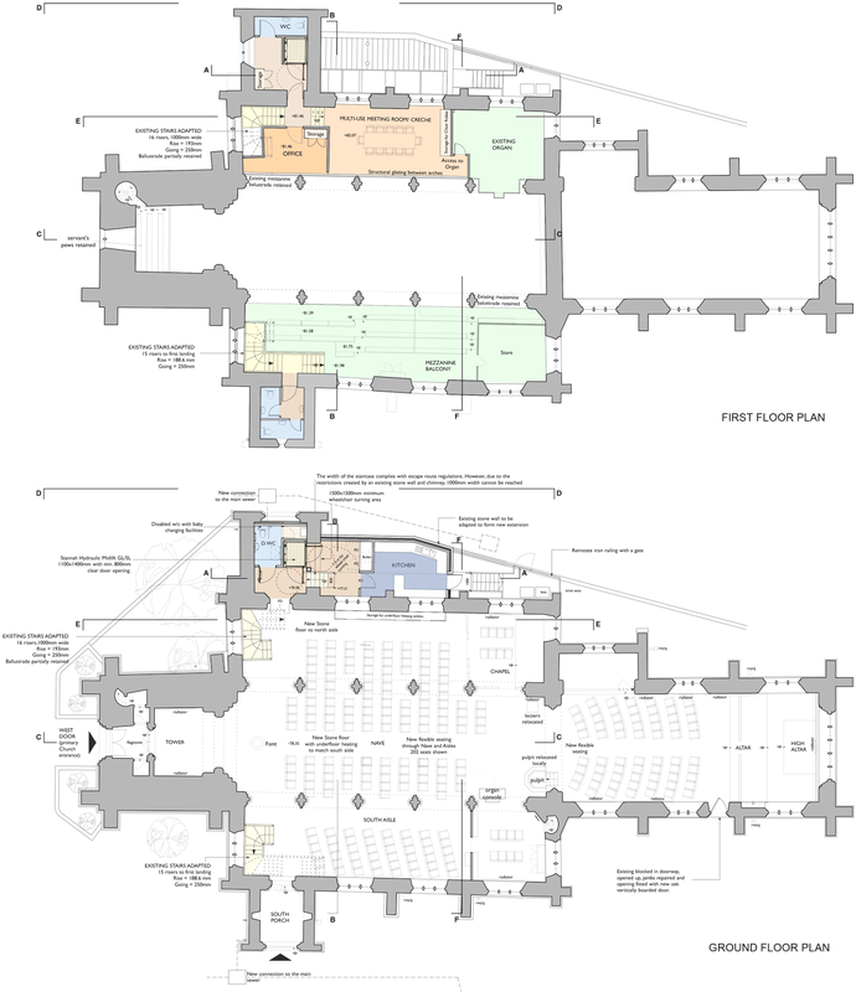 The hope is to develop the current church facilities to ensure they meet the needs identi ed by the PCC and capable of supporting the church for many generations to come. Every effort is being made to ensure these changes are designed and implemented in the most sensitive way possible to ensure minimal impact on the his- toric fabric of the grade 1 listed church and ultimately improve and enhance the existing building.
​
We believe these improvements will greatly enhance the church and its service to both the congregation and the wider community and we hope you support the project. 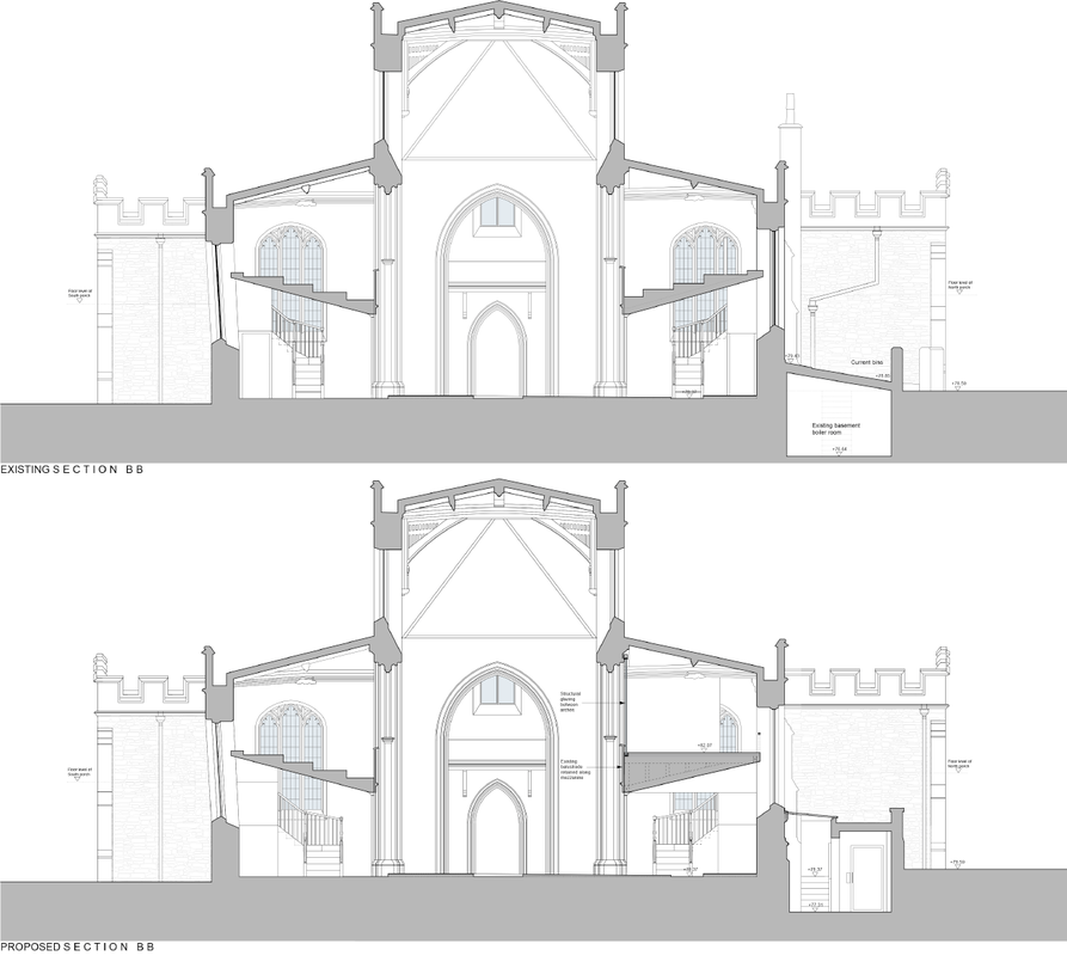 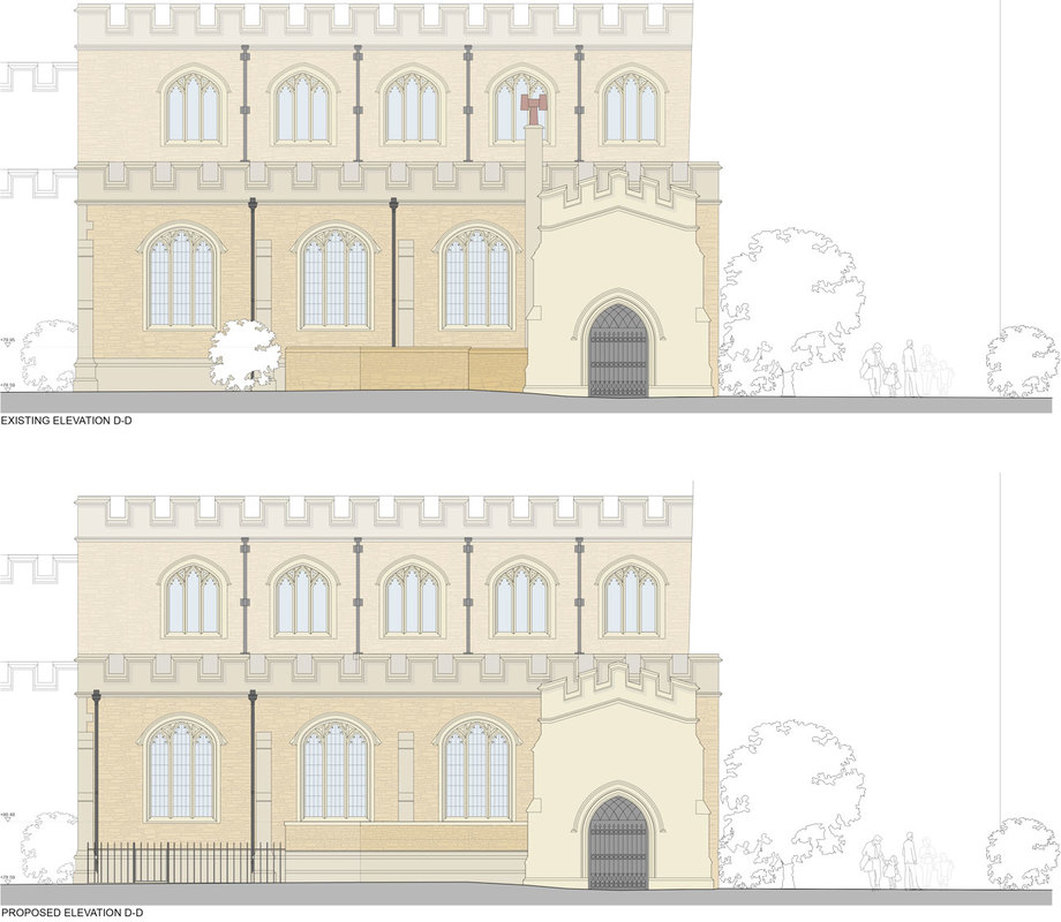 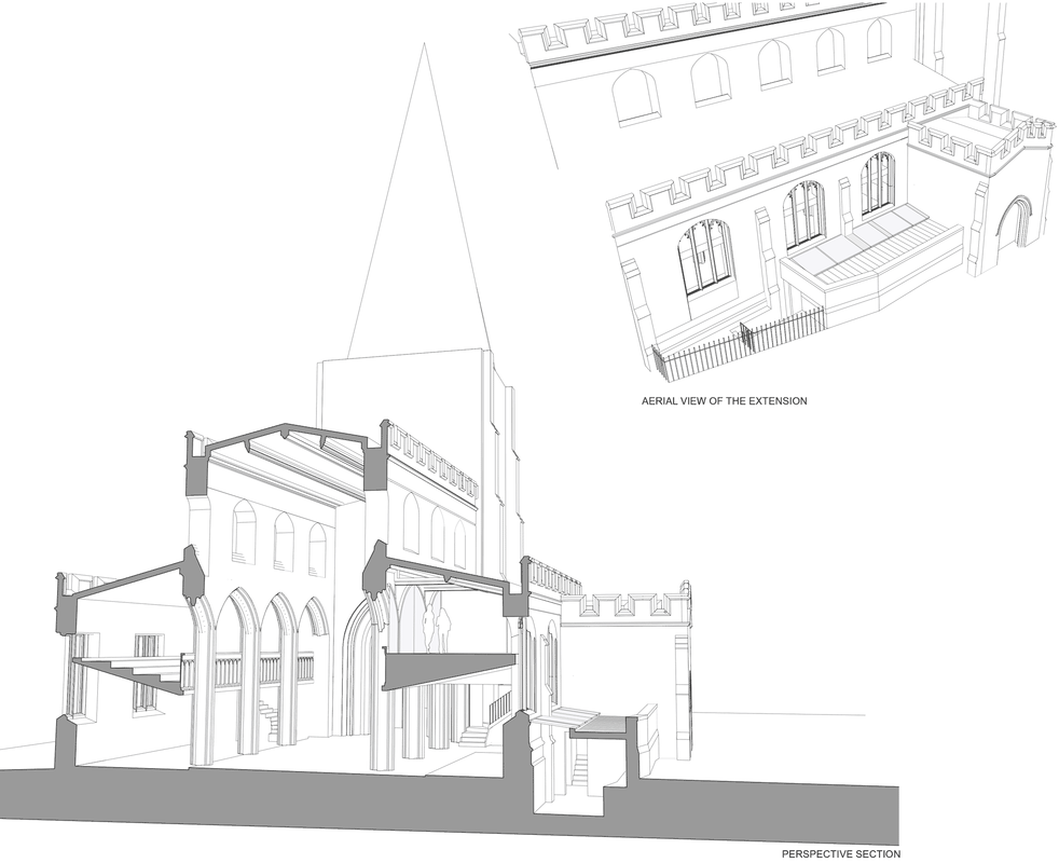 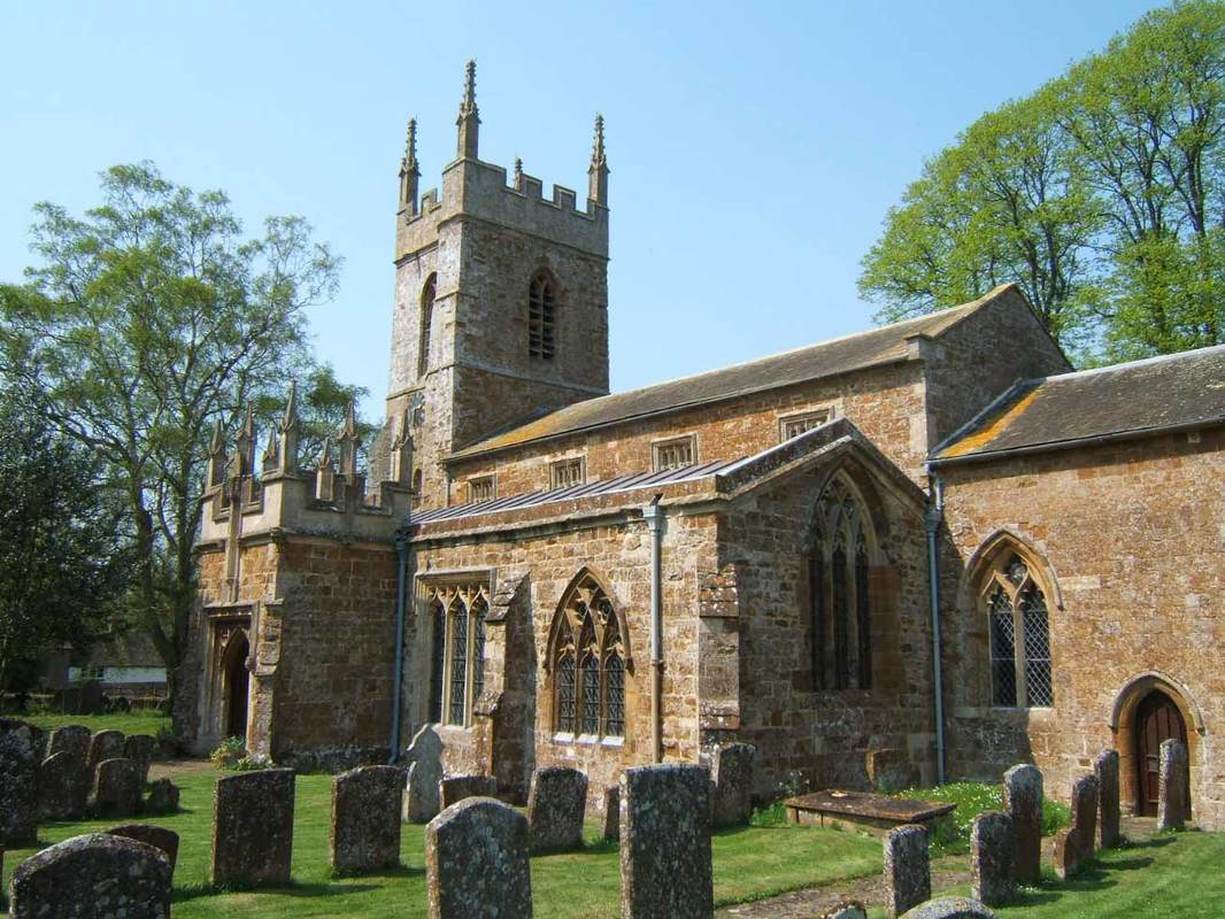 Investigation work undertaken in the summer of 2010 identified several elements within the existing wooden roof structure to the Nave which required replacement or repair. Movement within the structure had caused visible cracking and debonding to the plasterwork of the ceiling beneath. A programme of remedial works was therefore undertaken, replacing and reinforcing timbers and joints, and replastering those areas of ceiling which required attention. Local plaster repairs to the south aisle were also undertaken. Following the repair work the Nave, North and South Aisles and the Ringing Chamber in the Tower were re-decorated in a traditional lime wash.
Additionally, most of the fixings to the slate roof were suffering from corrosion. As such, the roof covering was removed and reinstated with new felt and battens, and re-covered with the original Westmorland Slates, with additional new slates to complete the works together with improved flashing details. The rainwater goods to the Nave were also repaired and restored, and the underground drainage provision improved to the south side of the church.
​
The project was partly funded by a grant from English Heritage. 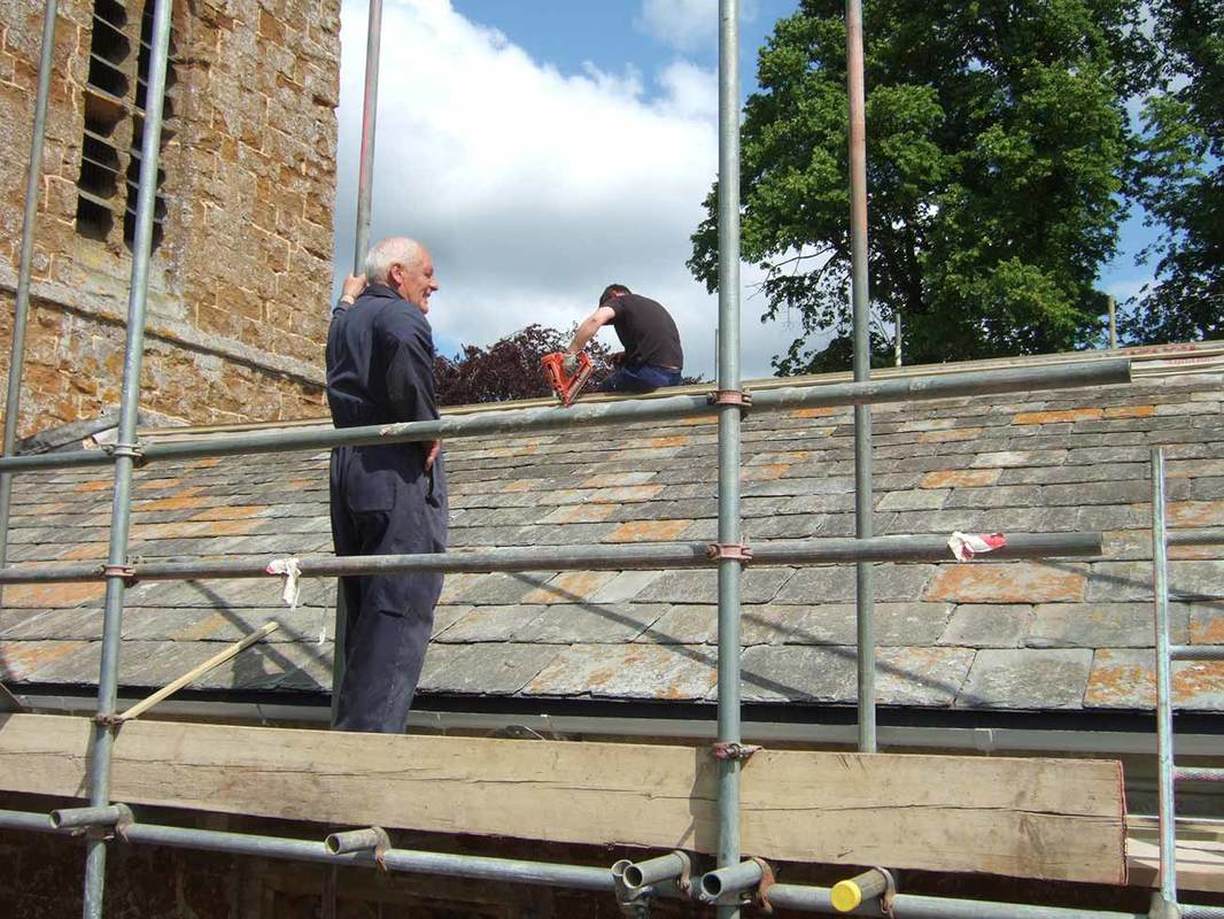 St. Philip’s Church and Centre is located to the south-east of Leicester city centre, along Evington Road, belonging to the Deanery of the City of Leicester. Recent success of the St. Philips Centre has lead to the existing facility becoming outgrown. Through the appointment of Acanthus Clews Architects the Centre will be integrated within the Church itself. The Church and Centre aim to sensitively fulfil the current and future needs of the community, providing an important space that is relevant and accessible to all, acting as a valuable resource for all faiths. The provision of flexible spaces and facilities will encourage spiritual, creative and educational activities.